The RADIUS change of authorization (as defined in RFC 5176) provides a mechanism to change authorization dynamically after the device/user is authenticated. Once there is a policy change for a user, you can send RADIUS CoA packets from the authorization server to reinitiate authentication and apply the new policy.

The RADIUS CoA process allows you to change the user access immediately when needed, without the need to wait for the wired switch or access point to initiate a re-authentication process, or for the device to disconnect and re-connect again.

CoA use cases (for connected authenticated devices) include:

Disconnect-Request (PoD – Packet of Disconnect) is a request being sent to the NAS – Network Access Server (i.e. switch/access point), in order to terminate the user session/s. As a reply, two packets can be sent from the NAS:

A CoA-Request packet can also be sent to initiate changes on the device or port such as re-authentication and bounce port. As a reply, two packets can be sent from the NAS: CoA-ACK (successful CoA action acknowledgment) and CoA-NAK (CoA failed action). When there’s a need for a VLAN change, using CoA-Request, might not force the endpoint IP address to be released and renew. Instead, it may only change the VLAN. Thus, for implementations that require VLAN change, it’s recommended to use the Disconnect-Request CoA packet which will lead to re-authentication, and for the device to get a new IP address on the updated VLAN. 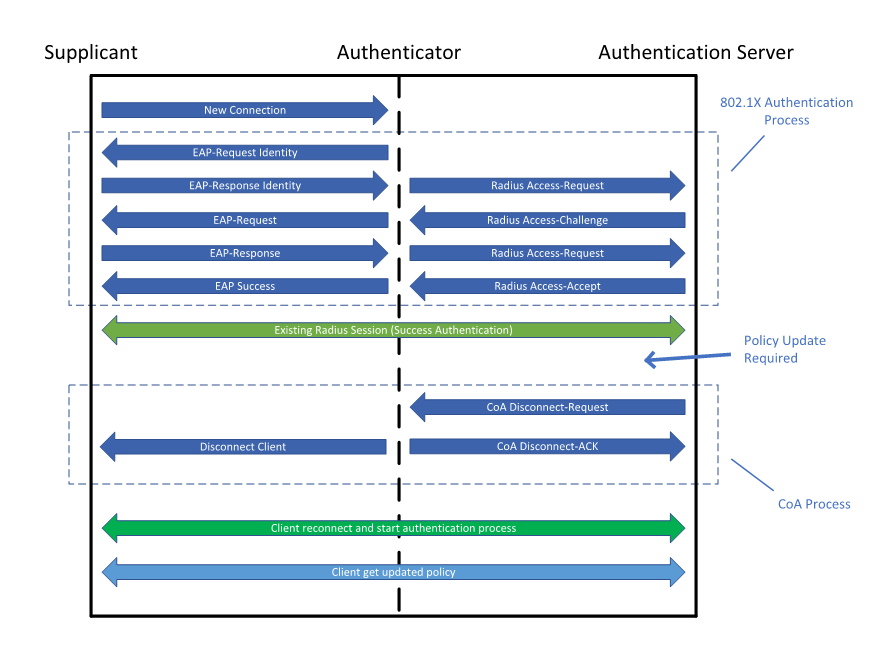 These packets contain attributes with information on the NAS (wired switch/access point), endpoint involved, timestamp, and a link to the frame of the RADIUS server requests / NAS responses.

Using Portnox CLEAR for CoA with dynamic VLAN assignment (previously discussed in Dynamic VLAN Assignment) implementation, allows the administrator to achieve a secure and segmented network for dynamic changes in the environment. Whether it’s an access policy change for a group of users/devices or a compliance change on a specific endpoint, the device(s) will be immediately placed on the relevant network, or blocked according to the policy.

In the following video, we’ll demonstrate a CoA use case of risk violation for a device with Portnox CLEAR. Scenario description:

About Portnox
Portnox provides simple-to-deploy, operate and maintain network access control, security and visibility solutions. Portnox software can be deployed on-premises, as a cloud-delivered service, or in hybrid mode. It is agentless and vendor-agnostic, allowing organizations to maximize their existing network and cybersecurity investments. Hundreds of enterprises around the world rely on Portnox for network visibility, cybersecurity policy enforcement and regulatory compliance. The company has been recognized for its innovations by Info Security Products Guide, Cyber Security Excellence Awards, IoT Innovator Awards, Computing Security Awards, Best of Interop ITX and Cyber Defense Magazine. Portnox has offices in the U.S., Europe and Asia. For information visit http://www.portnox.com, and follow us on Twitter and LinkedIn.。