RADIUS Change of Authorization (CoA): What Is It? Why Use It?

Companies close their offices on a large scale and introduce home office for all their employees. Currently, the vast majority of all Czech companies have introduced working from home for up to several weeks. A survey conducted by the technological company Safetica shows, however, that most affected companies are not sufficiently prepared for these steps.

“Ordinarily only a few percent of companies allow home office, and even only for a part of their employees. Working from home to such an extent is an absolutely unprecedented step that, in most cases, has a fundamental impact on the functioning of your company. Many companies are far from equipped and prepared for this step. They are threatening internal data in particular,” said Petr Žikeš, CEO of Safetica, a company focused on company data security.

The most common problems include insufficient equipment for the employees. Up to 65% of all the companies let their employees working on their personal computers.

What the companies should be careful of?

Experiences with data security show that the remote connection option remains a major problem, e.g. using the Remote Desktop Protocol (RDP). Without any other active protection, RDP allows transferring files from the workstation to the home station from which the user is connecting, and thus it allows leaking files outside the working environment.

Experts point out that another critical point is setting the AD-controlled access privileges (see the box below) to specific systems, data, and applications within the company network, which are often not properly configured. A failure to do so may allow the user to access and thus compromise data to which he or she is not supposed to have access. 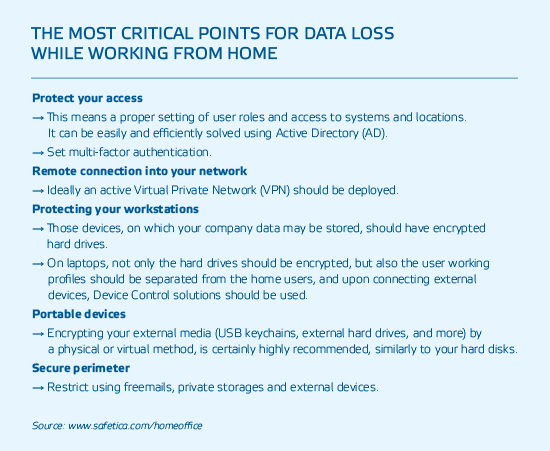 On average, one in ten companies in the Czech Republic has experienced sensitive data leaks

In most cases, this is an unintentional behavior caused by negligence. “With the increasing number of people working remotely and even from their computer instead of their employer’s one, the chances of data leakage problems increase,” says Zikeš, noting also a decrease in the productivity being a side effect. “The problem is not only in the use of personal computers and mobile devices to work from home but also the connection to your home Wi-Fi. These networks are easy to break. Your employees often do not even know how to secure their home network,” points out Zikeš, stressing also that Safetica has also prepared a manual on how to prepare the company and its employees for working from home.

He notes that also Safetica has adopted a company-wide working from home: “As a technology company we have the advantage of being much better prepared for this type of work. But this is not the case in every company. This is what has led us to the idea of helping others in this situation. And that is why we have suggested recommendations on what measures to take when working from home.”

About Safetica
Safetica is to provide small and mid-sized companies with the same quality data protection that corporations have – affordably, and without any additional IT administration or disruptions in operation.

RADIUS Change of Authorization (CoA): What Is It? Why Use It?